I’ve written a short prequel to the Echo series. Yes, there’s a reason! The next book–THE CURSE OF KUSURZA is coming soon!

Here’s the back cover copy for DEMONS & ULTIMATUMS. What do you think? 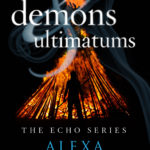 I’d been half in awe, maybe more, with him from that first night he walked through my sleeping mind. That was back on my sixteenth birthday. He’d showed up in my dreams every night since.
Every single night.

Echo’s carefully constructed world is about to crumble. She’s about to learn she’s the daughter of a god. Not just any god. Sotuk, the god of the Hisatsinom.

And she’s every demon’s most desired prize.

Which is why Zeke, her warrior prince–the man she can never remember by the light of day–walks through the realms of their world, killing the monsters that threaten her.

But Echo doesn’t know she is Zeke’s only barrier between him and the nightmares–nightmares that allow a dangerous god to sift through his mind.